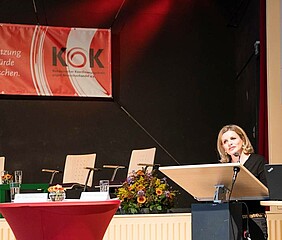 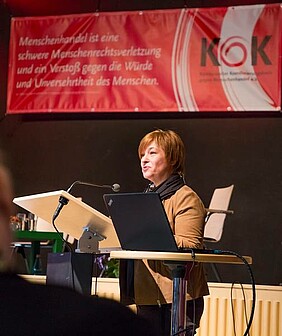 The KOK e.V. invited to a symposium in Berlin on the 25th and 26th October. Around 150 people with a variety of professional backgrounds from Germany and abroad took part in the conference and discussed with different speakers and panel guests about the question: “Trafficking in human beings and exploitation in Germany – taking stock two years after implementation of the EU Directive”.

The symposium focused on the exploitation of begging and forced criminal activities – forms of trafficking in human beings, which have only recently been criminalized in German law. It was examined from different sides, whether and how affected people of these forms of exploitation can be identified and supported. A glance at Austria, the United Kingdom and Belgium showed how other European countries are combating human trafficking and gave impetus to implement individual successful measures in Germany as well.

A detailed documentation of the symposium as well as recordings of the individual speeches are available here.